A Thought and Recipe for Leeks and Potatoes

"A Potato is Enough" 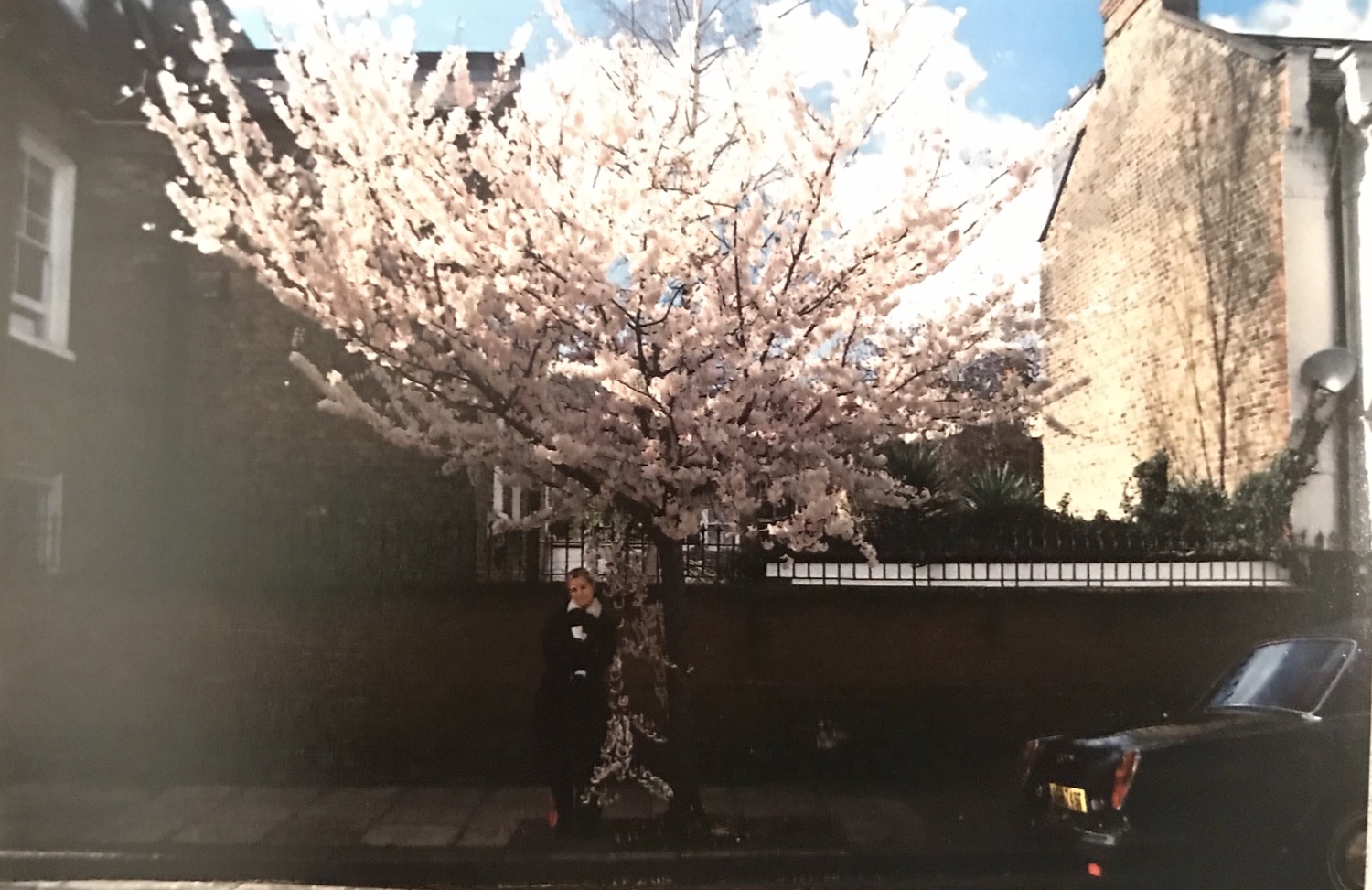 As I am writing this, I am sat in my flat in London. Preceding this moment was a largely uneventful day at work, a lot of concrete and a precious few longing glimpses at the outside world. I am at my ‘desk’, a desk which also functions as a table for food and is cluttered by bowls yet to make it back to the kitchen and books yet to be read. A window lets some crisp light into the room. The view out of this window is partially blocked by a cherry tree, one which at this time of year doesn’t have any leaves, but transiently explodes into life in March. The light which is allowed to enter the room is determined by the mood of this tree, and therefore changes with each season. The stippled shadows of seaweed green leaves which were grazed by the summer sun are now gone. Instead, in its wintry form, the light is angled and cut apart by the bones of the tree. The sight which the tree permits, looks out upon a street that is sporadically filled with people depending on the time of day.

I lean back on the wooden chair, but carefully, because one of the legs is notorious for giving way. Down a short flight of stairs is the kitchen. Disordered or as surly visitors have said, chaotic. Bags of flour are stacked upon each other, small pots of herbs find any space they can by the one window, jars, cans and bottles are filled with grains and pots and pans are huddled together on the stove. On a large chopping board, which sits perpetually upon the biggest surface in the kitchen, resides one globular onion, a splatter of garlic cloves, two rigid leeks and a handful of muddy potatoes and a knife. The scene has the frugality of a Vermeer, but the pleasant potential for pleasure of a meal yet to be cooked.

Before I begin to orchestrate the rumbling clatter of the kitchen, I think about how these deceptively mundane ingredients have made their way to a chopping board in a city kitchen. The onion is the dominant figure, it is a biggun, plucked by me from a pile of its counterparts. I start thinking where this lovely ball of latent flavour has come from and the conversations it must have heard along the way; from the soil it was nestled in, to the table top in my kitchen.

“Where are these ones going then?”

The next thing it will hear is probably, “I don’t feel like soup”, but that is the fate that awaits the onion. It is dropped into the soil and given half-a-year to mature into the well-rounded, versatile and employable vegetable it is now. It had to fend for itself, resist the diseases, feel the cool warmth of the spring and begin to nurture its bulbs when the weather warmed. It must know where it is heading, but they’re defensive creatures onion and my eyes will feel its fight. After being pulled from the earth and still covered in the soil which made it, it will be transported to the homes of millions of people to make soup, pasta, chutney, stews and stocks.

There are five earthly elements, fire, water, air, earth and garlic. Small commanding segments of potency, the Napoleon of the vegetable world. A determined advancer and in my eyes an improver of almost any dish. Small but mighty, it is the stimulation, the catalyst, the creator of clarity. However, it is also treacherous, one drop too many can lead to total domination and the repercussions are not only for the plate of food. Too much garlic will follow you round for the rest of the day, like an unwanted lover. Once its greenery has started to fade and the pitchfork is wielded, the bulbs will be lifted from the ground, like little nuggets of gold. Then it is intensified, the energy from the plant is forced down into the bulbs, dried and cured in the sun, it starts to settle and gain confidence. If actors ‘eat no garlic to utter sweet breath’, then I reckon we should leave them to it, because with the smell of garlic we have the gusto of life.

The leek sitting alongside is separated by its straightness, it is rigid, upright and always a little bigger than you had remembered. The leek is certainly not glamorous and it does need a bit of care and attention, but if you can mock a leek, you can eat a leek. Give it a good wash, give it a bit of heat and give it a good deal of butter and the humble will become the delicious.

Finally, and I hope you’re still with me, I turn my attention to the potato. I have read that it is out of fashion, that it doesn’t quite fit in with the clean eating, clean living rhetoric, but the potato is one of life’s constants. It has your back, can react to your mood, can lift you out of the mud and emphasise the good. A potato is enough, there is no excess, no artifice and it has the wonderful capacity to soothe. They sit on the chopping board, coated in earth, knobbly and misshapen and make me think happily of dirt, of cold blue wintry skies and steam rising from broken skin.

The time for thinking is over. It is now the job of the cook to turn these disparate ingredients into a meal. Soup is the easiest way to amalgamate these ‘things from the ground’, with some small manipulations and dollops of fat they can make something glorious. The flat love this meal and especially the additions of good cheddar, double cream and chives. For me, leek and potato soup doesn’t have to be humble or austere, instead it can make something splendid and comforting. A fog of frustration after a day at work, an empty space on the weekend, or a chance to feed hungry friends can be embraced by using thoughtfully what comes up from the earth. When the soup is hot and the butter on the toast melted, I sit by the window once more. A city doesn't have to be grey and whether it be the moss through the concrete, the tree knocking against the window or the taste of what comes from the ground, it's good to remember that things do grow. 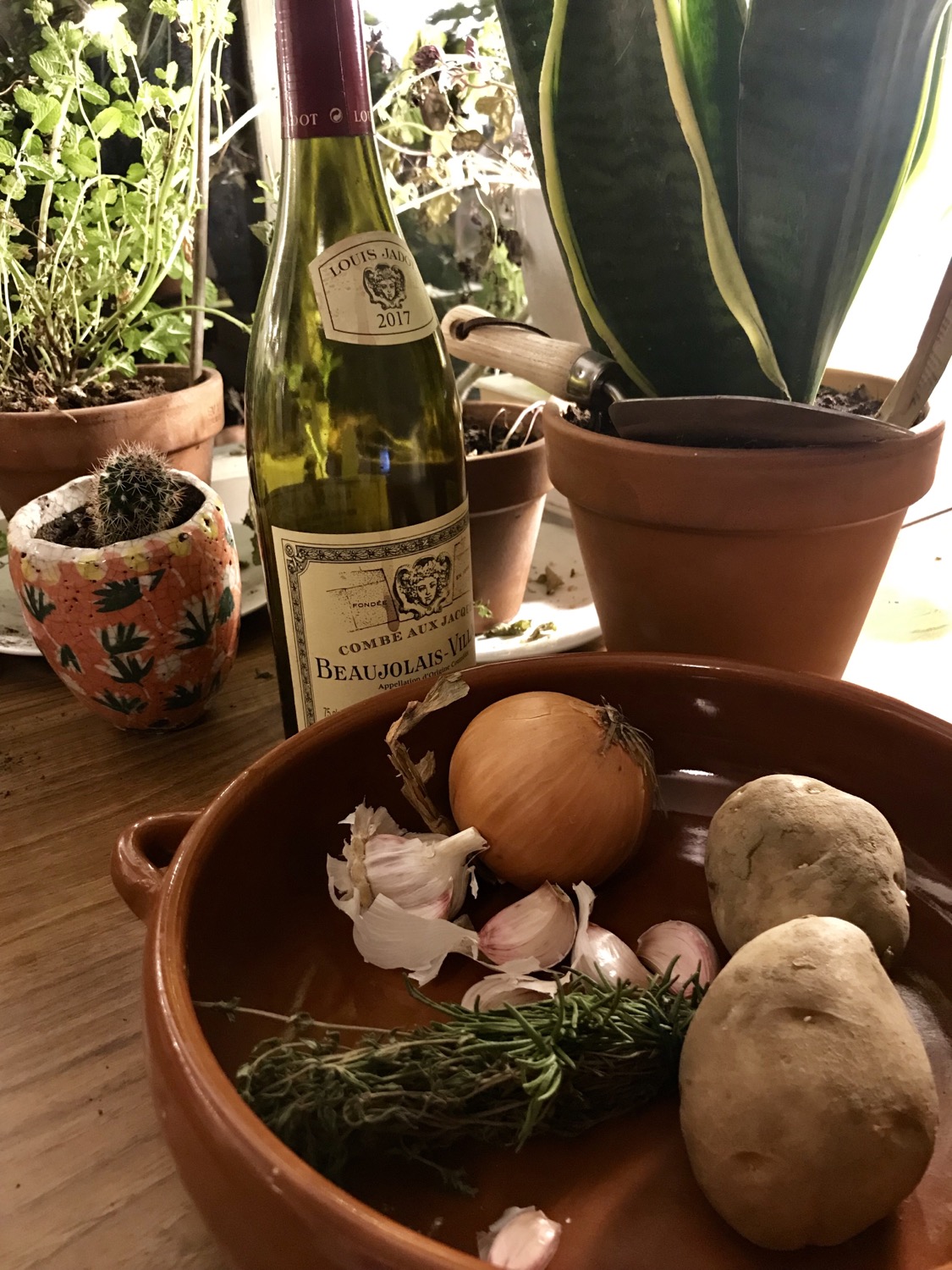 Recipe for Leek and Potato Soup

1)​Chop the Onion, Leeks and Garlic. Fry gently with a thick knob of butter and olive oil in your biggest, heftiest pan.

2)​Peel and then chop your Potatoes into 2cm chunks and add to the pan, along with a few springs of thyme. Make sure they are coated in the lovely butter. Season well. Cover with a lid. Fry for around 10-15 minutes, stirring occasionally.

3)​ After giving yourself and the vegetables some time, add the stock. Bring to boil, then reduce it to a simmer and cook for 10 mins or until the potatoes are soft.

4)​Take off the heat and blitz into a soup – you want it to be silky smooth.

5) Then add in the cream and the cheddar, season to taste and gently reheat the soup giving it a good old-fashioned stir.

5)​Serve with a powerful crack of black pepper, a generous scatter of chopped chives and a thick chunk of bread. I like to add a good shake of Lee and Perrins too.